You are here: Home / The Flea / So You Have Animal Fleas in Your Home – What Now? 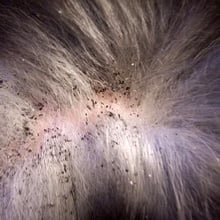 It should be kept in mind that there are many varieties of fleas, most of which are not of importance to humans as they tend to feed only on birds and wild mammals. Most species of animal fleas typically have a single host, however it is not surprising that they can bite, and even thrive on other animals.

Take the example of dog fleas. These mostly feed on dogs and cats but, in case of numerous infestations, they can prove quite troublesome to humans as well. Animal fleas found on rats also bite humans in absence of their primary host and are responsible for the spread of bubonic plague.

Animal fleas show marked variation in their habits in regard to the intimacy they have with their host. For example, the sand flea crawls beneath the host’s skin and lay its eggs. The sticktight flea and chicken flea also show this behavior but they do not attach to the flesh of their host. The human flea is also attached to man, though to a lesser extent in the way they remain upon the host, but are free for greater portions of time.

Animal fleas are wingless bloodsucking insects that feed on the blood of warm blooded animals. In small animals, such excessive feeding can cause anemia or even death. Animal fleas found on dogs and cats move rapidly on their host’s body and generally feed in the groin and rump region.

Fleas lay smooth round eggs on the host, which fall off in the animal’s environment. Small larvae hatch from the eggs and feed on flea excreta. The larvae then molt several times to give rise to pupa stage. From its pupal case, the adult animal flea emerges and starts its search for a host animal.

Animal fleas take a bite of their host, secreting saliva in its blood each time they do. This saliva can cause an allergic reaction in the form of inflammation and itchiness. The animal might be seen chewing or scratching itself intensely in the rump and groin area. This is a sign that it is allergic to the flea bites. In extreme infestations, hair loss, rashes and skin thickening may be seen on the host animal.

Signs and symptoms of a flea infestation

As stated above, small animals scratch, chew or bite their own bodies. This is the first sign of an animal flea infestation. In major infestations, dried flea feces and the host animal’s blood might also be seen. When this ‘debris’ is mixed with a little water, it will turn blood red. This is a sure sign that the animal has fleas.

There are a few ways you can effectively control and prevent animal fleas from entering your home:

If you follow the aforementioned advice, you can prevent the stage where animal fleas start biting your family members. However, if you are unable to do so, it is best to take advice and get help from professional pest control agencies. You should also contact your vet to get additional advice for treating the animals.

Professional pest control companies use water based residual insecticide sprays which continue to kill fleas for a week after its application. You will be asked to remove items that might be damaged by water. It is important to leave the pesticide undisturbed during its active period and it is vital to keep children and pets away from the treated area. Pet animals must also be treated with anti flea products to minimize the risk of re-infestation with animal fleas over the next few days following the treatment.