You are here: Home / The Flea / Flea Diseases – See How Dangerous Flea Bites Can Be 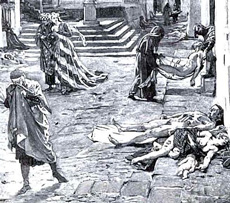 Fleas are small wingless insects that live on the blood of humans and animals. Although they prefer to live and feed on animals such as dogs and cats, they do consider humans as their source of food as well. Actually, there are different species of fleas, which has its own favored hosts, although each type of species is not limited to one type of host. This blood-sucking insect has mouth parts adapted to pierce the skin. It appears as reddish-brown in color or sometimes black, about one-eight of an inch in length and gets around by jumping from one place to another. Their bodies are flattened from side to side and have spines or spikes in the mouth, back and legs to stick firmly on their host, thus preventing it from getting groomed off. They also have claws on their legs adapted for travel in between hair shafts.

Why do fleas bite?

Fleas bite in order to survive. Why else would they do it? They are not trying to hurt you on purpose. Fleas have been known to store blood 15 times more than their weight and they need blood two to three times per day. Female fleas need blood in order to reproduce when actually fleas only mate once in their life. Flea bites on humans are usually caused by fleas on cats and dogs, and are usually very itchy and sometimes painful, appearing as small red bumps with a red halo around the bite. This reaction is actually caused by the flea’s saliva. Flea bites come in clusters or groups of about four and can even appear in a straight line. These bites are common on the ankles and legs, even around the waist, armpits, breasts, groin, and in the folds of elbows and knees. Some people are more sensitive than others and may have a risk of getting hives or developing a rash from flea bites, and some can even have a serious allergic reaction even from a single bite.

While too much itching and scratching can lead to infection, flea bites are also associated with other dangers. The dangers from flea bites are due to the disease carrying nature of fleas. The “black plague” is actually caused by a type of bacteria called Yersinia pestis spread by fleas, and killed 25 million people.

There are a number of flea diseases that can be transmitted from fleas, but there is one particular among them that can be acquired from a flea bite. As of today, a number of cases of bubonic plague have been recorded in the United States. Fleas are actually the vectors or the insects that transmits the pathogen which will cause the disease. Wild rodents such as rats are the natural carriers of the disease, which then infects the fleas when it bites them. The digestive system of the fleas is blocked by the reproduction of the bacteria, which will cause the flea to bite frequently to prevent from starving. The disease is then transmitted to humans via flea bites; the fleas may regurgitate infected blood to the bite wound. Signs and symptoms of bubonic plague may occur within a week of exposure to the bacteria. Symptoms may include headache, fever, fatigue or weakness, and the painful swollen lymph nodes known as “buboes”. There are other flea diseases that can be spread by fleas but through a different mode of transmission.

Fear of fleas and flea diseases

Fleas and other insects have also been known to cause fear in people. The fear of bugs and insects can be quite immobilising and cause people to stay in their homes to avoid getting in contact with fleas or other biting insects.