You are here: Home / The Flea / Plague Found in Arizona Fleas – How Worried Should You Be? 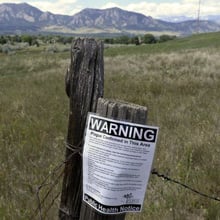 It is a word we do not hear very often in the United States: plague. However, the fact is, some fleas in the northern region of Arizona and Colorado have tested positive for this deadly disease. Naturally, people here are concerned and most pet owners are wondering if they and their pets are safe. More importantly, how worried should residents in these areas really be regarding this news alert? This article will explain the basic facts regarding plague and its spread.

What is Plague? What are the symptoms?

Plague is a deadly disease that can prove fatal to animals and humans. It is mainly caused due to bacterium called Yersinia Pestis. Plague can be transmitted through several channels, mainly fleas, rodents and wild animals that come in contact with humans and domesticated animals. Up until now, plague usually affected only 20 to 30 people in the United States on an annual basis. The number however is rising given the extent of flea infestations. This is the main reason why residents of Coconino County, Arizona should be worried regarding the news alert about plague found in fleas. Additionally, residents in these areas should be watching out for signs and symptoms of plague, which include:

These symptoms usually arise 2-3 days after incubation with the plague causative microbes. Plague is one of three types:

How were fleas with plague discovered?

Generally, a routine surveillance leads to such discovery. For example, the discovery of plague in fleas in regions northeast of Colorado, Flagstaff and Coconino County in Arizona were attributed to routine checks after fleas were sent to labs at the NAU which sounded the red alert on their findings.

Have fleas occurred in these areas in the past?

Yes, a news report in 2011 had also announced the discovery of plague in cats in Colorado, and some of these cases ended being fatal. Dogs were not as affected as cats. However, the Public Health Services Department had issued a warning that year for both cat and dog owners to get their pets tested and protected against fleas.

How do humans contract plague?

It is not just pet owners in Arizona who should be alarmed about this news report of plague in fleas. Infected fleas can also bite healthy humans and lead to plague. Handling infected animals or coming in contact with their bodily fluids through tissues, saliva etc can also cause plague. As mentioned before, people with pneumonic plague can also spread the disease through infected droplets by coughing.

Alarming facts about plague in the US: Where are most cases found?

A survey done in USA has shown that most human cases of plague have been discovered in Colorado and Arizona. Other states that have seen human and animal plague cases arising mainly from fleas are: California, New Mexico, Southern Oregon and Western Nevada. In short, the Southwest region of USA accounts for most plague cases seen annually in the country.

Should people be worried?

Plague spreading from wild fauna is no laughing matter. Typically, cases of plague have mainly occurred due to fleas infesting rodents, possums, squirrels, prairie dogs, wood rats, chipmunks etc. Dogs and cats that are left to roam outdoors in areas containing such wildlife are more likely to bring home the infection. Animal trainers, vets and pet owners could in turn get infected through flea bites, open wounds, or inhaling bacteria from pets and humans. Cats are most likely to eat infected meat and then pass on the disease to other pets and their owners. Unfortunately, there is no vaccine available for preventing plague. So prevention is the best cure when it comes to it. Early treatment through antibiotics can help stop the disease from becoming fatal.

How can plague be prevented and treated?

It is important to contact your public health department if you believe you or your pet has been exposed to this dangerous disease. Plague is not something to be taken lightly. Additionally, if you are infected with plague, you must take the required dose of antibiotics including tetracyclines, sulfonamides or chloramphenicol as prescribed by your doctor.