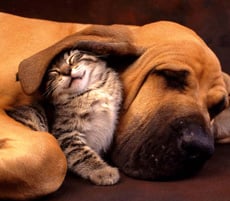 Fleas are parasites that feed on their host’s blood and when they bite, it can be very irritating. There are over 2,000 identified species of fleas but where dogs and cats are concerned, only one type is known to pester them – the cat flea. This pest can make the lives of dogs and cats miserable because not only does it cause excessive itching, flea bites on dogs can also lead to Flea Allergy Dermatitis and other skin conditions. This is because dogs are known to be sensitive to flea saliva.

Various bacterial and viral diseases as well as tapeworms are some of what fleas can transmit to pets. Once they connect to their host, they are hard to shake off because of their long, spiky leg structure that allows them to attach themselves firmly. This gives them free reign to feed on their host up to 3 times a day. So if you see your dog or your cat constantly scratching, don’t ignore as something they naturally do, but immediately check your pet for fleas.

The telltale sign of a bite is a small red spot where the flea made a puncture wound. You may not see this right away but your pets could still be bothered by fleas. Try to look for flea droppings mostly found along a dog’s tail or on a cat’s back. The droppings are tiny bits of pepper-like dots. Get a few of this and place one on a piece of white paper. A flea dropping contains the host’s blood that a small amount of water dropped on it will dissolve it and change its color from black to brown to red.

Identifying flea bites on dogs or cats is important as there could be areas on the skin that may need treatment for unsightly skin irritations brought about by the infestation.

Fleas may be hard to locate in the fur although they frequent the neck and chest area. If you don’t find flea bites on cats that you own, look for flea feces instead to determine if there is an infestation.

Knowing how flea bites actually look like is the key in indentifying them especially in your dogs.

Flea bites on dogs or on cats may become more pronounced when an allergy has already occurred due to flea saliva. In such cases, bald spots begin to appear as hair fall happen caused by irritation and infection. Checking for bites on your pets must be done with precautions because it is easy for fleas to hop from your pets to you. Fleas can’t fly but their legs are capable of hopping a great distance. When checking for flea presence, put on protective wears such as long-sleeved shirts and hand gloves.

Fleas only feed on their hosts and don’t live there but their bites could lead to a lot of trouble for your pets. Aside from incessant itching and scratching, the animal could also contract tapeworm when it accidentally eats the flea present on its body in an attempt to scratch affected areas.

There are effective ways to treat flea bites on cats and on dogs but elimination is the key to totally free your pets from unwanted effects of these pests. Your animal may not have fleas at the moment but an exposure could still take place. Take the necessary steps to prevent an infestation.