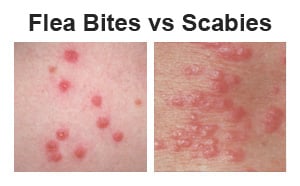 When comparing flea bites vs scabies, it is important to note that there are marked differences between the two. Scabies is a contagious skin condition that is typically caused by human scabies mites (or sometimes by feline or canine mites). Fleas, on the other hand, are ectoparasites that can also lead to intensely itchy rashes in humans and pets.  In this guide, we shall study the primary differences between flea bites vs scabies and the ways of telling them apart.

Scabies infections are caused by parasites or mites belonging to Genus Sarcoptes. These parasites enter human skin to lay eggs. The mites generally die off after a few weeks, but they continue to cause discomfort to humans, particularly if the source (canine/feline scabies) is left untreated. Human scabies mites normally do not affect pets.

Here are a few tell-tale signs and symptoms of scabies in humans:

Often, there is a comparison between flea bites vs scabies rashes. But, telling them apart is easy since scabies is characterized by a relentless itch, which is worst in kids and elderly.

Fleas are ectoparasites associated with pets. However, in absence of pets, fleas can bite humans. Often a comparison between flea bites vs scabies results in their being mistaken for each other. However, unlike scabies mites, fleas do not live on the human hosts. Fleas prefer warmer, hairier environments like pet hair. Fleas generally bite humans and jump off to hide in carpets, under the rugs, furniture etc. They leave a tell tale rash on the human skin, particularly in people with sensitivity to proteins in flea saliva. The flea bites appearance is distinctive and includes:

Flea bites, like scabies can be itchy. Some people are known to develop hives or allergic reactions that can lead to secondary skin sores.

Summary of flea bites vs scabies

Thus, there are many differences between flea bites vs scabies rashes. However, both, when left untreated can lead to several complications including secondary, harder-to-treat infections. Hence, any type of skin lesions, itching or rashes must be acted upon immediately to prevent further complications.