You are here: Home / The Flea / Water Fleas – Crustaceans of the Order Cladocera 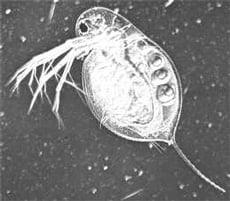 Water fleas under the order Cladocera have the scientific name of Daphnia ambigua which is the most common genus of the species. About 600 species under the order Cladocera has been identified although so much more are still unrecognized. They belong to the large group of “jointed limb” animals which mostly live in water. As a matter of fact, these species are not fleas but are actually members of the crustacean family, being the relatives of crayfish and shrimps. To learn about real flea species, read my article on different flea types.

The common name “water fleas” were given to these tiny creatures because of how they move underwater; these organisms seem to hop or jump as they swim. They are commonly found in freshwater like ponds, lakes and streams. The common kind Daphnia are mostly found in bodies of water rich in nutrients.

The Biology of Water Fleas

These organisms are so tiny that they are microscopic in size; they vary in size measuring only about 0.2 to 3.0 or 5.0 millimeters long. They have spiny helmet shaped heads with long antennae. These tiny organisms use their antennae to swim, thrusting it downwards to be able to push their body to the surface of the water. They take a pause as they push upward and float back down. As they drop downwards, they use their ten legs to breathe and collect food. They eat algae and protozoa. The main characteristic of water fleas is their bodies which are enclosed in some sort of shell which appear to have two lids but actually made of one piece. This characteristic truly signifies their relation to the crustacean family. Under the microscope, one can see through their bodies because its body and organs are transparent, able to see their beating hearts or circulating blood inside them, making them very interesting specimen under the microscope.

Despite having a hard outer shell, these organisms are still considered food by many marine animals such as small fishes, tadpoles other aquatic insects and even salamanders or newts. They are considered an important part of the food chain for they are able to pass on the nutrients they are able to eat from the algae to their predators. For instance, the nutrients eaten by the water fleas can be passed on to the fish that ate them, and also to humans even if they do not eat these organisms directly. These microscopic crustaceans can reproduce quickly that they are able to fill a pond so fast if they do not serve as prey to many other animals. They reproduce in the summer mostly via parthenogenesis; this is a type of reproduction without the fertilization of eggs. As summer ends, the eggs develop into male water fleas, which are then able to fertilize eggs developing into winter eggs.