You are here: Home / The Flea / The History of Fleas – Where Do Fleas Come From? 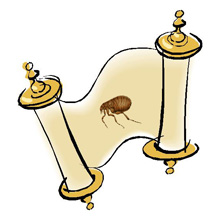 Fleas are bloodsucking parasites that feed on humans and other warm blooded mammals and birds. The history of fleas can be traced to the Jurassic age, though there is no paleontological evidence supporting this theory. We do however know where fleas come from and that is what we will discuss in this article by looking back at the history of fleas and their feeding habits.

Why study the history of fleas?

It is essential to study the history of fleas in order to determine ways in which one can eliminate this nuisance once and for all. By studying their life cycle, biology as well as the life history of fleas, we will be in a better position to understand their habits. This, in turn, can help us determine ways of eliminating them without harming the environment.

Feeding habits of the common flea

This flea is not host specific, but is known to prefer dogs and cats. In absence of these, it might feed on human blood however, it has now been seen from the history of fleas that human blood is not complete enough to fulfill their life cycle. Hence, dogs and cats are often the preferred hosts.

The cat flea’s life history also shows that it is an eclectic and cosmopolitan species having been recorded in nearly 3 dozen species including opossums, raccoons, Kangaroos and birds. Thus, it has a wide known host range and that probably helps explain why re-infestation of domestic animals occurs despite one’s suppression efforts. Since fleas tend to feed on humans and do not always show host preference or specificity, they can be a nuisance to companion animals as well as humans.

The history of fleas also shows other sub species such as Echidnophagia gallinacean which is common in Southeast USA and known to feed on prairie dogs, cattle, goats and other wild and domesticated animals. The Pulex Irritans or the Pulex Simulans or the human flea is commonly associated with humans, but can also parasitize animals.

All fleas of different sub-types are similar physiologically: they are quite small measuring only about 1/4th inch in length. They have flattened, wingless bodies with strong hind legs that enable them to jump long distances in the air.

The history of fleas shows that the oldest known species of fleas have been found in Baltic amber dating back nearly 35 to 50 million years ago. Today, modern methods and scientific instruments have shown us that the flea life history consists of various stages:

It is important to watch out for signs of flea infestations in a pet. Note how much it scratches and if and when the fleas are attempting to bite humans. If you suspect fleas in different life stages, then simple traps and monitoring tools may be used to determine the extent of infestation and also attempt their removal.