You are here: Home / The Flea / New Breed of Super Fleas with Huge Phalluses Will Not Invade Homes 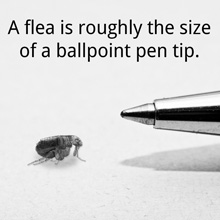 Now that the weather is cooler, we are not really in the fear of flea invasion. However, recently, a huge batch of fleas – supposedly with huge phalluses (that’s the fancy word for penis) has been sighted. There were reports stating that these creatures would invade our homes, particularly in the South East parts of UK, if left unchecked. However, experts in pest control have rubbished these claims and stated that our homes, and pets, are completely safe. Read on for details on this story…

The reports stated that there was a sudden outbreak of fleas having gigantic phalluses, coming out of their hibernation earlier than normal, thanks to somewhat warm weather in parts of the United Kingdom last month. So-called ‘experts’ claimed that these creatures were invading homes of residents in many parts of the country. Where these parasites came from was not known exactly, but these ‘stories’ seemed to point out to the fact that they could be journeying in from Europe. A pest control company by the name of Basis Prompt has been quoted in these reports. However, most reports were unclear in that; they did not clarify whether there simply were more fleas than usual or whether they were mass reproducing owing to the large penises.

Thankfully, the authority on this subject has spoken. The British Pest Control Association (or the BPCA) recently rubbished rumors of these super fleas. This organization, as well as the independent Pest Management Consultancy (PMC) both stated that there is no evidence to support these claims.

Spokesman of the BPCA, Kevin Higgins, says: “Fleas are usually linked to domestic animals: dogs, cats, rabbits and so on. So the only thing pet owners must do is to be vigilant and check their homes and their pets from time to time”. Mr. Higgins also went to assure that while he has been seeing fleas, they are not bigger than usual and especially none with the ‘super’ body parts.

Likewise, Mr. Clive Boase of the PMC stated that his own knowledge and expertise did not validate these super flea reports. He said that a warmer-than-usual September indeed saw him answering more house calls for fleas, but none of them had giant penises.

Also, there is a likelihood that the story of the super fleas could have come from an unlikely source from the previous year – truck drivers. Hundreds of truck drivers transporting goods to and from Europe had asked for pest control treatments last year for their trucks, insides of which were seeing huge super flea infestations.

In fleas, proportional to its body size of about 1 millimeter, the penis is relatively large. Also, it is highly complicated and perhaps the biggest penis as compared to other insects. The flea phallus consists of hooks, spikes and knobbly bits which allow it to engage in hours of copulation. The male keeps the phallus coiled up until it is ready for action. The hooks and spikes on the flea penis prevent the male flea from disengaging easily from its partner. Some experts claim that the male flea actually has two penises – a big one for penetration and a shorter one, curled around that, for foreplay. This gives the flea an opportunity to indulge in several stages of mating where it can use different components of its genitalia to excite the female.

The best way to cope with super fleas

The best way to cope with fleas, super or otherwise, is to use the vacuum cleaner. It helps suck up the immature fleas and prevents them from mating or giving rise to uncontrolled outbreaks. Apart from vacuum cleaning, it is important to treat pets as well as the areas they spends time in, by using effective, vet-approved flea products. You must also clean your yards if your pet spends time outdoors. Fleas are generally not dangerous, but they can be very unpleasant. They will, in most cases, not seriously harm us or our pets. Large infestations can kill small kittens or puppies though, so don’t wait for it to get worse before you take action.

Remember: cold, wet weather will kill the immature fleas that are out in the open, so a sudden spell of cold weather is all that we need to slow down the fleas, super or otherwise! Thanks for reading and take care.