You are here: Home / The Flea / Flea Pupae – Third Stage of the Flea Life Cycle 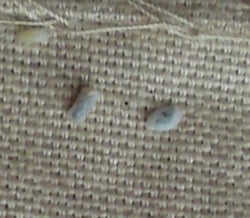 In the life stages of the wingless parasites known as fleas it is the third stage called flea pupae that make up 10% of their population whatever the time of the year is. The fact that fleas have been around since time immemorial proves that they are not easy to eliminate. Hence, part of managing, controlling and killing these parasites is to understand them and it would certainly help to be aware of the final stage of this pests’ development, before turning into larvae and then becoming full grown but tiny blood suckers.

A flea infestation is bad enough. The fact that there could be unnoticeable white eggs almost anywhere at home that will soon reach larvae stage and then pupae before becoming adults to feed on your pet’s blood is another dreadful thing.

Only a small percentage (about 8%) of flea larvae makes it to the flea pupae stage of the cycle but once they reach this phase, they are almost unbeatable. Even after some initial treatment while in the egg stage, some of them manage to progress to the next stage, a stage where they become protected by a sticky coat, making it hard to kill them as chemical treatments are unable to penetrate their coating.

This stage allows a developing flea to sit it out dormant from a short one week to a long one year until triggered to hatch and emerge as an adult flea. What triggers the hatching includes:

These creatures are also able to produce a silk-like material to form a cocoon just like that of a moth or a butterfly. Materials like dust, hair (animal or human), lint and fibers added to their cocoon structure and their very small size make it easy for them to blend with their background and hard for the naked eye to spot them.

If a moth or a butterfly cocoon looks like a nature wonder and a beauty in its unique way, the same cannot be said of the flea’s shelter.

As mentioned above, while in this stage, the phase can be inconsistent. With sufficient amount of food, flea pupae can quickly hatch and start making the lives of pets miserable or remain safe inside for as long as it takes. It is vital to be on your guard of their presence even if you believe to have had them under control. Be diligent in cleaning, particularly proper vacuuming if you suspect an infestation, whatever flea stage they may be in.